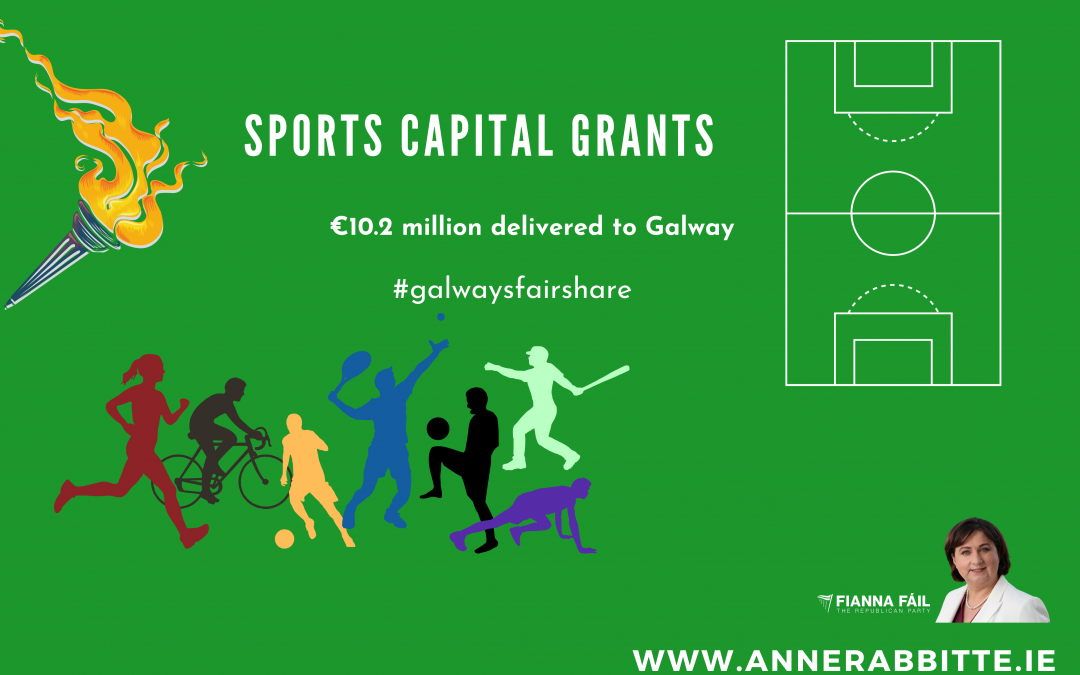 Minister for Disabilities and Fianna Fáil TD for Galway East, Anne Rabbitte, has welcomed funding of over €10.2 million for clubs across Galway under the latest round of the Sports Capital and Equipment Programme (SCEP).

Announced on Friday, the money will fund the provision of a wide variety of initiatives, including grounds maintenance machinery and equipment, gyms, pitch resurfacing, lighting, and capital projects such as new dressing rooms gyms.

The funding is spread across a wide variety of sports, from GAA to golf, from tennis to Camóige and from rugby to running and judo. The full national amount provided totals €150 million, which is a record allocation.

The Sports Capital Grants for Galway in 2022 is a major investment in Galway sports across a diverse range of clubs and organisations covering the full spectrum of ages. This will be a major boost to facilities across communities in Galway and is indicative of how important sport is in every community in the county. These clubs and organisations are the backbone of many communities – it is what binds them.

It is also great to see Galway clubs receive funding for projects deemed to be of “regional” significance. This is indicative of the scale of some of the projects and facilities being developed, including Moanbaun in Athenry – a joint venture between Athenry Association Football Club and Athenry Athletics Clubs – which is receiving €300,000 for the provision of a regional eight lane running track, the Galway County Board has been allocated €297,073 for the redevelopment of Tuam Stadium – which has been long called for – and the Galway Camogie Board have been granted €35,788 for ball stop netting and the completion of works on dressing rooms.

I have been working closely with my Fianna Fáil colleague and Minister for Sport, Jack Chambers, to ensure Galway receives its fair share of the funding and I think today’s good news for Galway reflects this. After I invited him to Galway last year, Minister Chambers got to see first-hand the hard work being put in to bolster clubs and organisations across the county so he knows the importance of this funding and how far it can go. Kudos is due to the clubs and the people behind the applications. There is a lot of paperwork and time to get these projects over the line so I’m sure there will be sighs of relief in many clubs today.

I think we’ve all seen the importance and benefits of sport and physical activity during the pandemic, and an overall investment of €150 million in the Sports Capital today reflects this government’s commitment to ensure clubs and organisations can provide the facilities necessary to support communities across Galway. Such funding undoubtedly helps develop our athletes into the future and propel them to greater levels, whether locally, nationally or even internationally,” concluded Minister Rabbitte.

All unsuccessful applicants will be given the opportunity to appeal the Department’s decision and information on the appeal process will issue to relevant organisations in the coming weeks. €6 million has been set aside to cover successful appeals under this process.