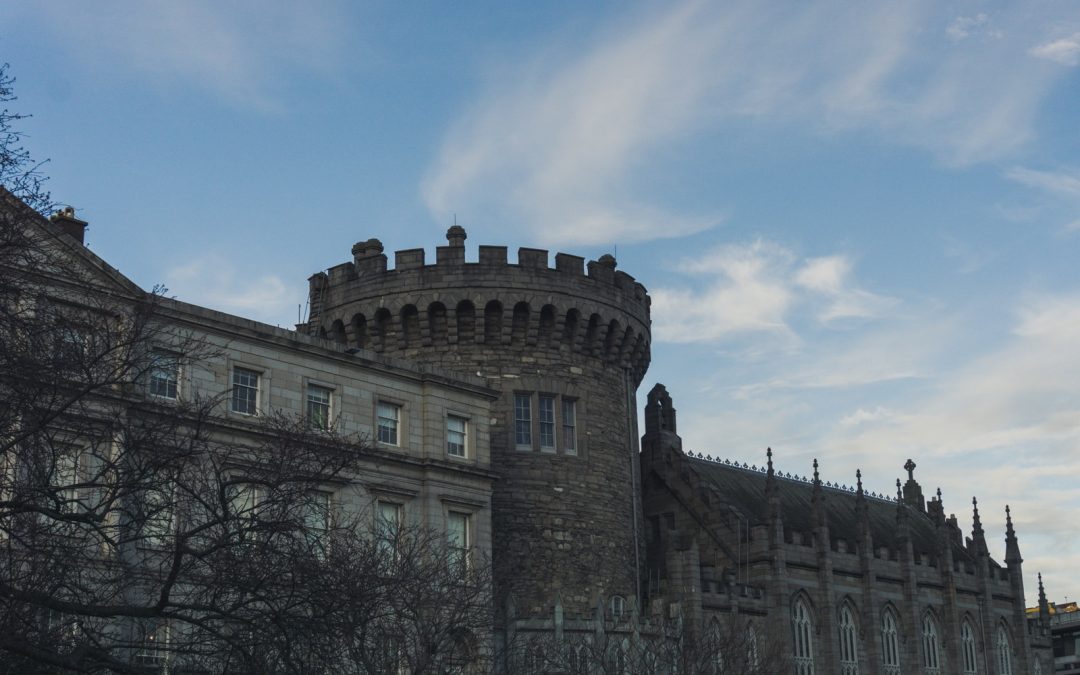 On 16th January 1922 at 1.45pm, the last Lord Lieutenant, or Viceroy, of Ireland formally handed over power and Dublin Castle itself, to the new Provisional Government.  The ceremony was concluded within a brief 45 minutes.  This Sunday marks the 100th anniversary of this historic event – one of the most significant in modern Irish history and a key centenary moment in the Decade of Centenaries Programme.  While it may have been overshadowed in public memory with the outbreak, six months later, of a devastating civil war, this and the subsequent events of 1922 profoundly shaped the political landscape of the State.

A State commemoration will take place outdoors on Sunday, 16th January 2022, in the Upper Castle Yard of Dublin Castle, in the presence of the President, the Taoiseach, and Defence Forces Ceremonial.  This event is organised by the Department of the Taoiseach and will be broadcast live on RTÉ One.

Trinity College Dublin will host a two day conference on 14th and 15th January, at The Printworks in Dublin Castle, to explore the implications of this dramatic shift in the centre of power, the immediate reactions, and anticipated consequences.  Experts from Ireland and abroad will consider the historical significance of that day and responses in Ireland, Britain, and around the globe, to this moment when, as The Irish Times reported ‘The old regime ceased to exist’.  The programme includes an address by Taoiseach Micheál Martin T.D. and by the Minister for Tourism, Culture, Arts, Gaeltacht, Sport and Media, Catherine Martin T.D.  Register today to join this free public event which will be live streamed at: https://histories-humanities.tcd.ie/research/handover/.

The Office of Public Works is also supporting a rich diversity of partnerships and initiatives to mark this key centenary moment and to highlight the significance of Dublin Castle – one of the most important and complex buildings in Irish history but perhaps still one of the least well-known.  For further details about the programme of events taking place, visit https://www.dublincastle.ie/.

·       Among the records on display are minutes of the first meeting of the Irish Provisional Government (‘Rialtas Sealadach na hÉireann’) in the Mansion House on the morning 16 January 1922. The handwriting appears to be that of Michael Collins. The second point on the agenda reads ‘Arrangements were made to visit Dublin Castle at 1:40 p.m. in the afternoon for the purpose of taking over the various Departments of State.’

·       There are also a set of minutes from 4pm on the afternoon of 16 January 1922, after returning to the Mansion House. They contain the text of the statement later issued to the press, describing how ‘members of the Provisional Government received the surrender of Dublin Castle at 1:45 p.m. to-day. It is now in the hands of the Irish nation’.

The Royal Irish Academy has produced two new publications to mark the significant events that happened in 1922, assisted by the Department of Tourism, Culture, Arts, Gaeltacht, Sport and Media and the Office of Public Works;

·       ‘The Handover: Dublin Castle and the British withdrawal from Ireland, 1922’, by John Gibney and Kate O’Malley of the Royal Irish Academy.  The book uses the moment when Michael Collins collected the keys of Dublin Castle on 16 January 1922 to document the handover of power by the outgoing British administration to the Provisional Government of Ireland – a relatively unfamiliar but hugely important story.

This week An Post issues three national (N rate) stamps which mark the centenaries of three momentous events that heralded the establishment of the Irish Free State, including the transfer of power on 16th January 1922 to the new Provisional Government.  These historic stamps were designed by Detail Design Studio Dublin.  They feature special intaglio print and are available in main post offices, the GPO Dublin and online at https://www.anpost.com/Shop, with free delivery.

Speaking ahead of the forthcoming events, An Taoiseach, Micheál Martin said:

I welcome all the events taking place to mark the significance of 16 January 1922, a day that helped shape our journey towards sovereignty and self-determination. This weekend’s Decade of Centenaries Programme provides us with an opportunity to acknowledge and reflect on the principles that have buttressed one hundred years of parliamentary democracy, and our place in the world as one of the oldest continuous democracies.”

The handover of Dublin Castle by the British to the Provisional Government led by Michael Collins, is a seminal moment in Irish history and marked a major stepping stone towards independence and the creation of the Irish Free State later that year.  Ireland is far from perfect, we have many problems still to solve, but we should not lose sight of the fact that our State has been successful and all that has been achieved in a hundred years of independence.

Ireland is one of the world’s oldest uninterrupted democracies, enjoys peace and prosperity and has among the highest living standards in the world. We are at the heart of the European Union and sit on the United Nations Security Council. This would have been unimaginable a century ago. We owe so much to the revolutionary generation of a hundred years ago. It is fitting that we honour them today.”

The castle was a symbol of British power in Ireland for almost 700 years and its handover to the forces of the Free State was a pivotal as well as a hugely symbolic event. This engaging and imaginative programme of events marks the centenary of the handover of power and of Dublin Castle itself to the new provisional Government.  I would like to express my appreciation to our valued partners – including the Office of Public Works, the National Archives, Trinity College Dublin, and the Royal Irish Academy – who have created really ambitious initiatives to encourage us all to explore and reflect on the events that took place on 16th January 1922 and their legacy.

I have said before that the history of this seminal period belongs to all of us and it’s really important that we approach our remembrance of these events in a holistic way – seeking to understand how each impacted upon the next.

I would like to thank the Expert Advisory Group on Centenary Commemorations, chaired by Dr Maurice Manning – their guiding principles, grounded in historical accuracy, academic integrity, and archival discovery, will continue to be the cornerstones of the commemorative programme as we navigate through this complex and sensitive final phase of the Decade of Centenaries.”

The formal transfer of power, in the handover of Dublin Castle on January 16th 1922, is singularly one of the most potent moments in the history of our State.  For centuries, the Castle had symbolised British rule in Ireland and the demonstrable handing over of the Castle was a most powerful occasion for citizens and the Provisional Government of Ireland alike.  Still charged with the ghosts of history, today Dublin Castle continues to play a pivotal role in political, civic and social developments for our Nation while also offering a unique place of welcome for citizens and visitors to engage with Ireland’s rich and complex history.

The handover of Dublin Castle represents in dramatic visual terms the momentous reality of change and the beginning of an unbroken century of sturdy and sustained parliamentary democracy and steady national development and self-realisation – a feat which few of the other emerging states of the period were able to achieve.  It is truly a key moment in our long history.

As we reflect on one hundred years of Irish independence, Trinity College Dublin is delighted to contribute to the Decade of Centenaries Programme with this significant conference marking the centenary of the handover of Dublin Castle on January 16th 1922.

The events of that day were overtaken and perhaps overshadowed by the civil war that soon followed, but this coming weekend, drawing on the latest research, Irish and international experts will retrieve the historical significance of January 16th and provide fresh understanding of this pivotal moment that shaped modern Ireland.”